Reprinted from BorderLore, e-journal of the Southwest Folklife Alliance (May 2018)

Story and photographs by Maxwell Gay

It’s an early afternoon in March in Nogales, Arizona, and the confluence of two nations is abuzz with middle school and high school youth. They unfold tables and chairs, pass out water bottles, and set up a small stage facing the nearly 20-foot-high steel fence that separates this town from “el otro lado,” the other side. There, in Nogales, Sonora, a similar scene unfolds.

This kind of gathering may seem out of place in a context associated mostly with inflammatory politics, violence, and security. But here, young people from both sides of the border have come together to nurture dialogue and share critical consciousness of how and why the border impacts their lives, divides their families and their city.

The event, Seeds Binational Border Youth Dialogue/Dialogo Juvenil Fronterizo, was organized by Seeds Semillas Youth Action, supported by VozFrontera, a new initiative of the Southwest Folklife Alliance in Nogales. Seeds Semillas, a binational grassroots group of 13 to 18 year olds, started as a gardening and food justice club in 2016 and has since grown into a full-fledged organizing team focused on creating critical conversations about issues that affect youth in Ambos Nogales. Their goal is to ensure that their community will be a resilient environment for their elders, themselves, and future generations.

The youth efforts dovetail with a number of new endeavors and organizations in Nogales, Arizona working to renew attention to humanity, community, and well-being. These efforts focus on food justice, local produce, heritage preservation and knowledge sharing, accessible housing, and affordable solutions to housing problems. Organizations like Seeds Semillas and the Nogales Community Development Corporation are building gardens, repairing homes, assisting residents with their income taxes, and creating subsidized housing.

The space created by Seeds Semillas is a crucial element of the change occurring in Nogales. That’s not surprising. Young people have been integral to many movements throughout U.S. history, including the anti-Vietnam war movement in the 1960s and 1970s, the Civil Rights movement, the East LA walkouts for Chicanx educational rights, and Black Lives Matter.

I’ve participated in several youth organizing groups in Tucson, and attended many radical political gatherings and protests. The level of energy, participation, and conversation I saw at the Seeds Binational Border Youth Dialogue is impressive. In my experience, creating a safe space for middle school- and high school-aged youth to publicly share their personal experiences with political and economic forces is not always easy. As young people, we are often systematically trained to believe that our voices should be kept quiet. It’s clear to me that Seeds Semillas is doing the work to dissolve those inhibitions and equipping youth with the necessary skills to fight for change in their community. The young people I saw organizing in Nogales are vocal, outspoken, and empowered.

Their work is a tangible response to inequities and oppressive conditions at play along the border. Their everyday movements happen amid the miles of towering steel pylons, clusters of high-tech thermal cameras, and a constant flow of agents in armored vehicles. Here, acts of violence loom large in the minds of young people.

Just a few yards away from this gathering, 16-year-old José Antonio Elena Rodriguez was allegedly shot in the back ten times by U.S. Border Patrol agent Lonnie Swartz through the border fence in 2012. José Antonio was on the way home from playing basketball with friends at a local church. An autopsy showed he was shot while his back was turned to the fence. Just this month, Swartz was found not guilty by a hung jury. After public response, the appellate court ruled for retrial, which will begin October 23. Painted hand prints and “Justice for José Antonio Elena Rodriguez” stickers on the rusted steel commemorate the event.

Today’s focus is on the power of connection, dialogue, and resilience. Chairs are arranged in a perfect circle, an effort by organizers to help encourage non-hierarchical conversation. This circle, however, is bisected by the border wall. Roughly half the youth sit in the United States, and half in Mexico. Many of those can’t cross north, and the strategic positioning of this event at the border allows them to have radical dialogue with one another in a way that would otherwise be impossible.

Their conversations cover life in a militarized zone, the presence of migration in their community, the threat of violence and constant surveillance, division of families and the arduous wait to cross the border which some of them endure daily. One middle school student from Mexicayotl Academy, René, shares that he’s been getting up at four o’clock in the morning since he was five years old to cross the border and get to school on time. Older students comment on how increasing militarization has changed the process of crossing for them.

Over pizza, they exchange ideas about how these systems can be counteracted, disrupted, and shifted by young people; about how they can build a community they want to live in, even within the reality of border militarization and politics. Seeds Semillas is building hope for Nogales, hope that the power of young people can indeed create change and shift the greater narrative about the border.

Maxwell Gay is a Tucson-based photographer and a former intern at the Southwest Folklife Alliance. He is also co-founder of Ojalá, a cooperative of “artists, criminals, and digital revolutionaries.”

Learn more about Seeds Semillas on their Facebook page. 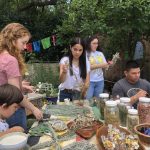 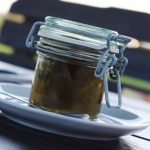 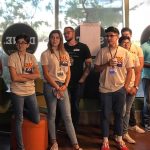